What is fiscal sponsorship?

Any nonprofit agency deemed a tax-exempt public charity by the Internal Revenue Service can be the fiscal sponsor of a nonexempt community project. The charity must have been awarded its tax-exempt status under Section 501(c)(3) of the Internal Revenue Code and have a legally binding agreement to sponsor the project. Agreement signed, the fiscal sponsor can receive gifts and grants for that project and provide donors with evidence of their tax-deductible contribution — a game changer that can make valuable community projects suddenly viable.

“The charity must be in the controlling position, and the nonexempt project must act so as to further the charity’s exempt purposes.” That is the essence of the fiscal sponsor project contractual relationship, according to attorney Gregory Colvin in his transformational book, “Fiscal Sponsorship: 6 Ways to Do It Right.”

Besides providing the sponsored project spectrum of administrative support services, fiscal sponsorship can be practiced under various models approved by the IRS. The bottom line is adhering to the contractual relationship among donor, fiscal sponsor and project, illustrated at the start of each model in “Fiscal Sponsorship: 6 Ways To Do It Right.”

Fiscal sponsorship is best and most comprehensively explained in “Fiscal Sponsorship: 6 Ways to Do It Right,” the “bible” of fiscal sponsorship, by San Francisco attorney Gregory L. Colvin.  Study Center primarily practices two of the models. 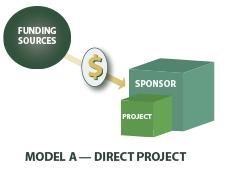 Model A or Comprehensive
In a Model A fiscal sponsorship relationship, the fiscally sponsored project becomes a fully integrated program of the fiscal sponsor, which maintains all legal and fiduciary responsibility for the sponsored project, including its employees and activities and provides comprehensive financial management and administrative support. This model, according to the National Network of Fiscal Sponsors, is particularly valuable when a project has employees.

Model C or Preapproved Grant
Under Model C, the fiscally sponsored project remains largely autonomous. It is a separate entity responsible for managing its own tax reporting and liability issues. The sponsor assures that the project will use the grant funds to accomplish the ends described in the grant proposal. This fiscal sponsorship model is generally utilized in the arts. 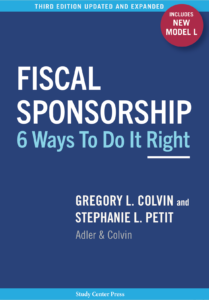 Study Center Press published the revised and expanded third edition of Gregory Colvin and Stephanie Petit’s “Fiscal Sponsorship: 6 Ways to Do It Right” in November 2019. This edition is available only from Study Center Press.

Looking for a fiscal sponsor?
Contact the Study Center about your new project today.